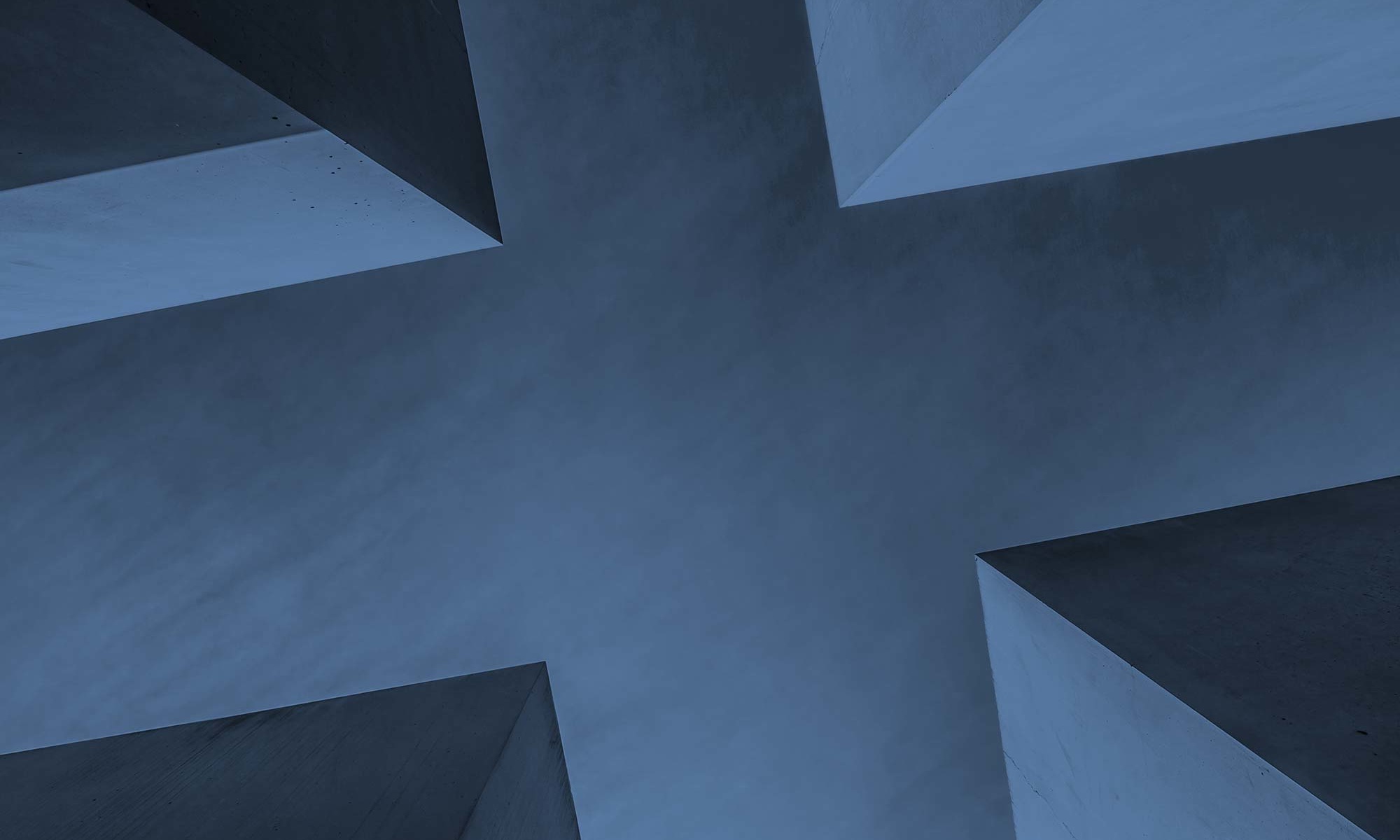 The world economy has now entered a substantial recession due to the Coronavirus outbreak. The S&P 500 recorded a 20% drop in just 13 days, twice as fast as The Crash of 1929. This is the quickest bear market drop in financial history. With no liquidity in sight, every asset class saw substantial losses. It is still too early to estimate what the full effects will be, however it is clear they will be considerable, prolonged, and painful for many businesses and individuals.

Before the Coronavirus the US economy had expanded for more than a decade and added jobs for 113 straight months. Stock markets were consistently hitting new highs. Despite this, economic growth had slowed both globally and in the US, and there were clear indications of an inevitable downturn looming. The combination of this pandemic and over-extended nature of the global economy led to a collapse of colossal magnitude. This in turn has spawned one of the largest stimulus packages ever designed. The US government has so far actioned $6 trillion in response.

Even with the forced liquidations, crypto has held up well and staged a small recovery. At the end of Q1, total crypto market cap fell 5% YTD, compared to a 10% fall for the S&P 500. In the past 12 months Bitcoin is up over 50%, dwarfing gold’s rise of 20%.

Crypto may not have lived up to the narrative of being an uncorrelated asset or a hedge against macro volatility, however, it has managed to keep just shy of $200 billion in value during what has been the most violent sell off across global markets in recent memory. 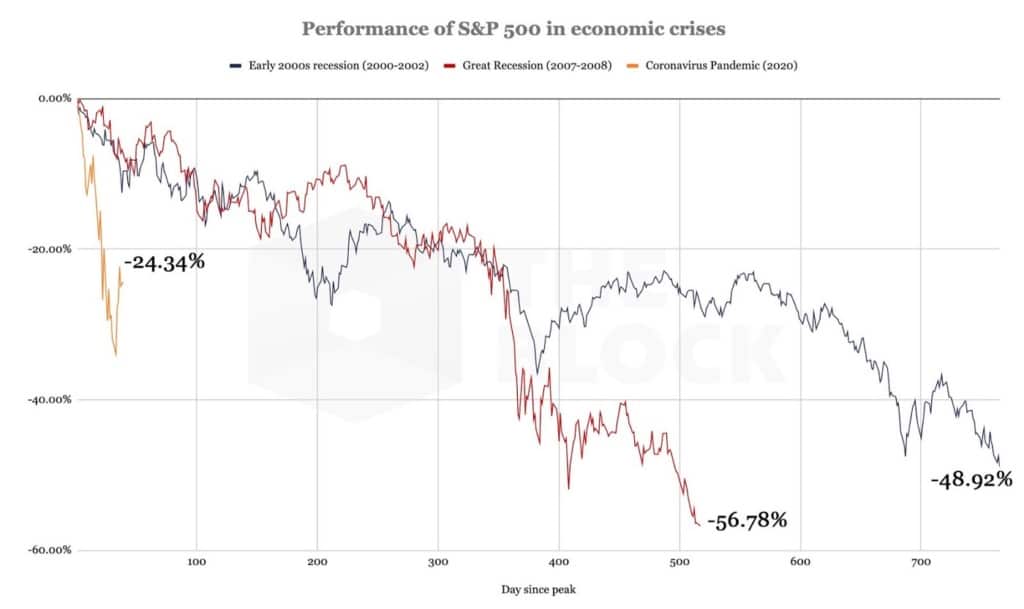 The Performance of S&P 500 in economic crises. Source: The Block

The job market fallout could continue to be ‘dramatic’ according to Goldman Sachs, who now expect the global real GDP to contract by about 1% in 2020.

‘With lockdowns and social distancing becoming pervasive elsewhere, we expect real GDP in the advanced economies to contract very sharply in Q2’. Goldman Sachs forecasts a 34% economic contraction in the US and 13.2% unemployment in the second quarter, Deutsche Bank have estimated a 33% contraction and 12% unemployment.

While many are calling the Coronavirus a Black Swan event, it may have just been the catalyst that revealed how overbought financial markets were. For over 12 months, market analysts have been calling for a global recession. In April 2019, we discussed how the worry expressed towards the macro environment was captured by the title of the IMF report, ‘A Delicate Moment’. It is now clear that the foundation of market growth was delicate, and it is this global pandemic that finally turned markets downwards. When the dust settles this sell-off will no doubt expose a lot of bad risk, hidden beneath the growth of the longest expanding economy ever.

The selling began on March 12th and 13th, exacerbated by forced liquidations on major exchanges. The rapid spike in volatility and turmoil in global macros created a mass correlation between all risk-on assets and many risk-off assets.

After the substantial sell off across global markets, Bitcoin recovered slightly pulling back over $6,000 on March 19th. Prices showed signs of recovery as details of government stimulus initiatives were finalised, bringing better clarity to the situation. Bitcoin started the month just over $8,500, and finished at $6,400 down over 24%. 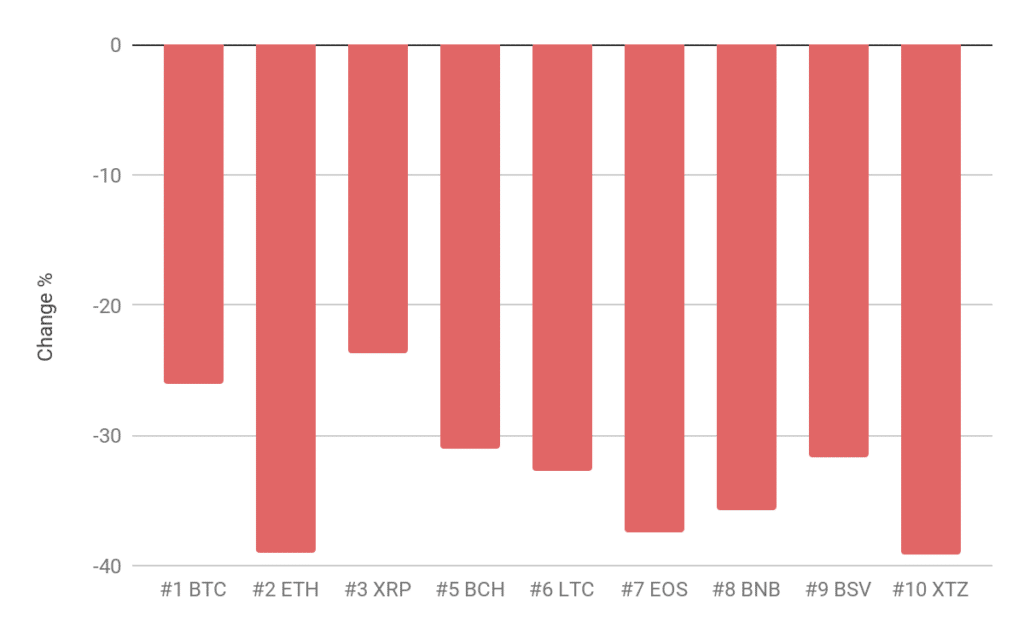 Price Performance for the top 10 assets. 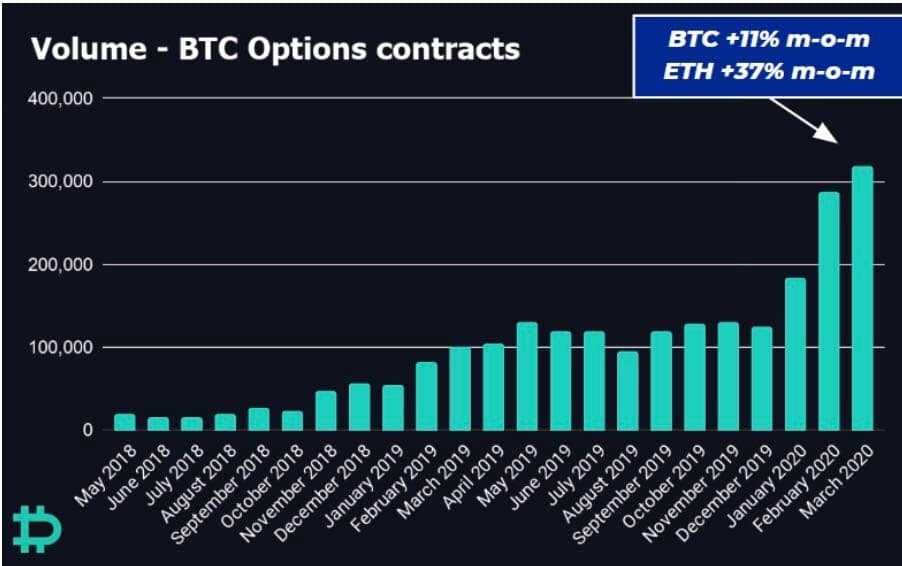 Skew recorded a massive $1.5bln in sell liquidations for BitMEX’s XBTUSD perpetual swap contract on the 12th and 13th of March. 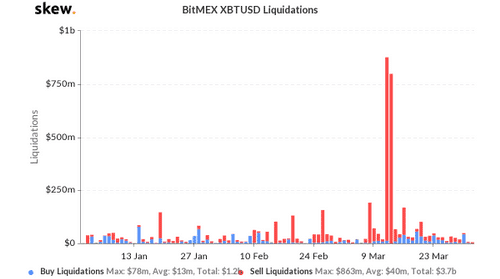 Throughout the recent market turmoil Bitcoin has been largely correlated with financial markets, especially during times of significant volatility. The narrative of the digital asset class being uncorrelated to traditional finance has been proven untrue. That being said, this month was unprecedented in its nature and voracity. It is plausible that Bitcoin will grow to move more independently in its future. It has shown glimpses of decoupling over short periods — and the macroeconomic response to this pandemic has strengthened the long-term fundamentals. But for the time being it seems major moves in the S&P 500 will be mirrored by BTC.

Bar a brief ‘bull market’ on the 25th of March for the Dow Jones, its probable global markets have further to fall. The positive few days in the green could have been down to many factors; over-enthusiastic bargain hunters, or maybe some thought the worst is over, however, the most probable reason was quarter end rebalancing for pension funds (given the rally in bonds, they needed to reallocate to stocks). Due to the size of the stimulus package, it’s unlikely further monetary actions will be implemented. Therefore positive news will be limited over the next few weeks as everyone watches the numbers affected by this pandemic rise, despite the maximum efforts of state governments.

For crypto, sentiment seems to remain bearish as perpetual funding has been negative since March 12/13. If there are further sell-offs to come, it’s possible we will see bitcoin below $6,000 again. The US is still in the early days of combating the economic impacts of this pandemic. We think that traditional markets will continue to trade poorly over the next few weeks, which could weigh down crypto prices. In the last month we have seen the demand for puts vs calls increase substantially, this shows that for the time being people are more concerned with hedging their exposure to BTC than getting long.

Our bullish window for crypto is about two to four months out, as the market digests some of the side effects of infinite monetary and fiscal stimulus.

The long-term case for crypto has been made stronger by the impacts of this pandemic — not just the printing of money, but low interest rates, problems with traditional payment systems and the growing momentum behind CBDCs.

The largest economic stimulus package in recent memory will hopefully be effective in relieving workers, and supporting businesses as well as a stretched healthcare system. However, over time it means we will see substantial inflation. The Bitcoin narrative against quantitative easing was already a strong one long before this record breaking stimulus package was implemented. The global responses to this crisis has been to print, print, print!

For the time being, as uncertainty still lingers, dollars are in high demand. As the dust settles people will begin to look for a store of value, and the federal reserve has disincentivised holding dollars in the long term due to this stimulus.

On March 26th Bitcoin’s mining difficulty dropped 16%, the second largest drop in its history. The difficulty is designed to adjust itself every 2,016 blocks or about two weeks. This is due to many miners either shutting down completely, or switching off machines that are no longer profitable. Selling pressure has been present from many miners throughout this volatile period as they sell inventory to remain operational. The approaching halvening will put more pressure on small mining operations. Conversely these drops in difficulty have historically represented great buying opportunities.

Bitcoin is trading like a risk asset and its correlation to traditional markets is undeniable. Short term we could see bearish price action for crypto, as there is still a large amount of uncertainty that surrounds the growth of the pandemic. Global markets will not rebound until there is a clear light at the end of the tunnel, and for the moment it looks like things will get worse before they get better.

The genesis block of Bitcoin linked to an article making it very clear what role its creator thought it would play. ‘Chancellor on brink of second bailout for banks’ is a well known headline to the crypto faithful. Bitcoin was born at a time of financial collapse, how it responds to this one will shape its future.

Amid the chaos and uncertainty stemming from the pandemic, powerful American policymakers were seriously considering the idea that the Federal Reserve should issue “digital dollars.” In the end, policymakers decided to use existing methods, like direct bank account deposits and mailed paper checks. However, it is interesting that at one point late in the debate, at a crucial moment for the health of the financial system, a form of digital currency was considered.

The pandemic has predictably sparked a rise in trading activity, but it’s only adding to what has been a substantial shift towards risk management in 2020. Volumes for the custom swaps and options contracts we provide have already surpassed the total volumes for 2019 and we’re on pace for a 400% year-on-year increase. With more time and experience under the belts, trading parties have begun embracing risk management. In the years leading up to 2018, it was a handful of highly-sophisticated traders that were using custom swaps and options to protect their long-term positions. Today’s volume is evenly spread across miners, exchanges and token projects — all of whom are looking to use custom derivatives to manage risk and volatility.

“We’re going to be in a period of zero rates for a long time. We could see bitcoin act as a global inflation hedge due to many aggressive stimulus packages being implemented,” Said Richard Rosenblum, co-head of trading at GSR. https://t.co/MgYeuvt1LL

GSR's Co-Founder Rich Rosenblum gave his thoughts to @ForbesCrypto yesterday on the dramatic moves seen across the #crypto market.https://t.co/US9JkLjf1G