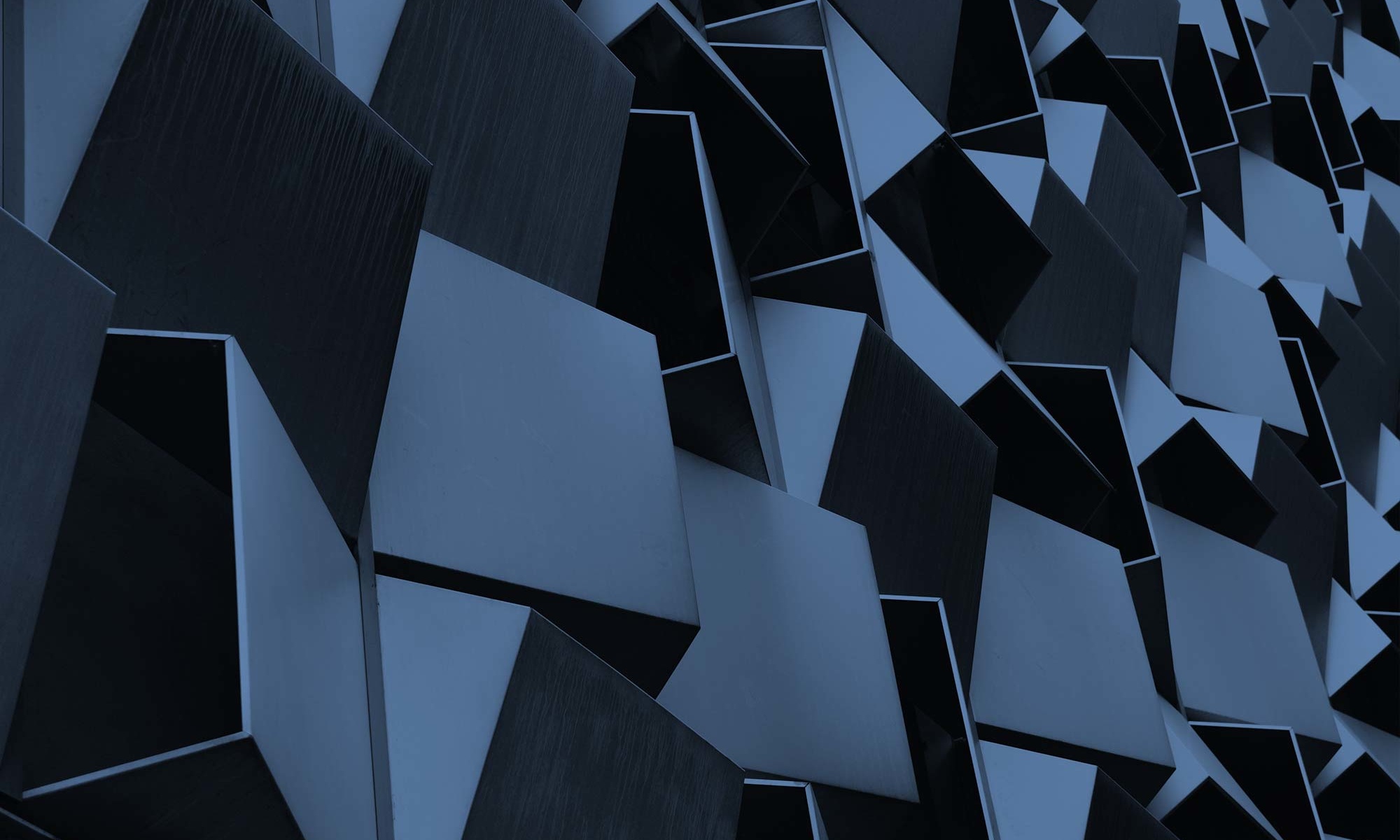 Since the inception of the cryptocurrency market, its volatility has captured the attention of traders and media across the world. Volatility is the most basic measure of the riskiness of an asset, it represents the uncertainty the market has for an asset’s underlying value. As the digital asset market matures, more and more products are being introduced, however many of the financial instruments that are common in traditional finance have not yet made their way into the cryptocurrency space. The Cryptocurrency Variance Swap is the latest structured product released by the GSR team, that will allow traders and institutions to hedge against, and take advantage of, the market’s volatility.

What is variance and how is it related to volatility? Mathematically, volatility is the square root of variance. Therefore, they are closely related and in trading parlance are often used interchangeably.

The most common approach to measure volatility is to take the annualized standard deviation of an asset price returns during a specific timeframe. Therefore volatility measures the magnitude of price changes and traders often speak of high volatility when the market moves in a wide range over a short period of time.

Volatility (and hence variance) will nevertheless increase when prices move quickly in either direction, while it will decrease in quiet market conditions.

Although it may potentially benefit businesses providing short-term investment and trading opportunities, a highly volatile market, due to its unpredictable nature, can negatively impact enterprises when decision-making relies on long-term planning and market stability.

Because volatility and variance intrinsically represent uncertainty and risk that may affect the success of different business models, GSR developed a product for the crypto market that provides pure exposure to variance, the Bitcoin Variance Swap.

The swap enables the counterparties to trade the difference between a strike varstrike which is set upfront and the realized variance varrealized over the duration of the swap. The notional is a dollar amount per annualized volatility point squared and it is chosen upfront to be the number of units required for the trade. So the payoff of the Variance Swap at maturity is:

Variance Swaps therefore offer a direct payout on future realized variance which is unrivaled by other forms of volatility trading. For example, trading an option has exposure to volatility, but it’s reliant on following a delta hedging strategy that removes underlying delta risk.

Volatility has different features that make it interesting for trading. As we mentioned earlier, it will increase when uncertainty grows. In addition, volatility is generally characterized by mean-reverting behavior, therefore a high volatility regime will likely follow low volatility levels. 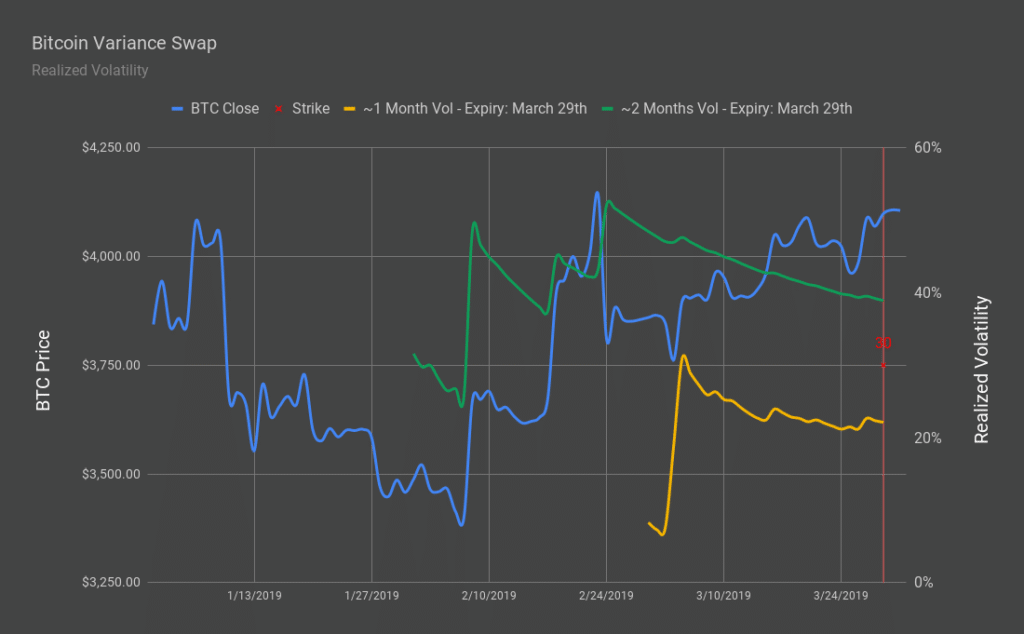 For example, if an investor wants to express a directional view on Bitcoin volatility and she expects it to rise, or if a business wants to buy insurance against volatile crypto markets, they can get long a Bitcoin Variance Swap position.

Let’s consider an investor who initiates a trade the 1st of February, to get long a Bitcoin Variance Swap expiring the 26th of April for a notional amount of $100’000, with a strike volatility of 30% (i.e. 0.09 variance strike).
Starting from the initiation date, a BTC index (such as the CME-CF BRR) will be monitored and used as a reference at specific observation dates to compute the Bitcoin realized variance. In the figure above the green line shows the Bitcoin realized volatility during the lifetime of the contract. At expiry, realized volatility is marking 38.91%, so the payoff for the client is:

If an investor has a bearish view on Bitcoin volatility, for instance expecting a market slowdown, she may want to sell a Bitcoin Variance Swap to profit from a decline in volatility. On the 1st of March the investor sells $100’000 worth of a Bitcoin Variance Swap expiring the 26th of April with a strike volatility of 30% (i.e. 0.09 variance strike). The yellow line above shows the Bitcoin realized volatility over the duration of the contract. At expiry, realized volatility is marking 22.12%, so the profit for the client is:

It is important to note that there is no premium to be paid in order to enter a Variance Swap position. So initiating the trade is costless for the investor.

ETH/USD and BTC/USD with maturities out to Dec 2019.

However, these strategies need to be actively managed and periodically rebalanced in order to hedge delta (or directional risk), an exercise that often results being time consuming and especially costly, due to scarce market liquidity and expensive transaction fees.

Alternatively, trading a Variance Swap provides pure directional exposure to Bitcoin volatility that does not require any position maintenance. So even though the Variance Swap can be classified as an exotic product, its features make it easy to use and relevant to a variety of business and investment cases.

Founded in 2013, GSR is the original leader in algorithmic digital asset trading. We have traded billions of dollars of digital assets utilizing our proprietary software suite, capable of satisfying all liquidity needs, from basic execution services to highly complex solutions. We have a deep understanding of digital asset liquidity and microstructure, having integrated into over 35 trading venues. Our team leverages decades of experience from Goldman Sachs, Two Sigma, Nomura International, Oracle, Circle and IBM across trading, quantitative investments, and trading technology. GSR’s algorithmic platform has been trusted by many of the top players in the space, including miners, protocols, ICOs, exchanges, custodians, and banks.