Chart of the Week: At the Peak of Central Bank Digital Currencies

With the digital yuan set to be featured at next week’s Winter Olympics, we review CBDCs and their current status in this week’s Chart of the Week.

Central banks are tasked with maintaining price stability, ensuring sound monetary and financial systems, and promoting access to safe and efficient payments. However, from changing behavioral patterns such as the declining use of cash to the rise of powerful fintechs like Alipay and Paypal and the growing use of private monies such as stablecoins, the way we pay and the forms of money we use is quickly evolving. Moreover, the provisioning of trusted money is a public good, and central banks must ensure credible, convenient, and accessible money in an increasingly digital world. As such, many central banks are studying whether to issue a Central Bank Digital Currency (CBDC), a widely-available digital form of a country’s fiat currency.

CBDCs differ from other forms of money, namely commercial bank and nonbank money, in that they are a liability of the central bank itself, and thus have virtually no credit or liquidity risk. As a result, CBDCs do not require government deposit insurance to maintain public confidence and central banks do not need to back it with assets. CBDCs may be retail, used by the public for day-to-day payments, or wholesale, used as an instrument for settlement between financial institutions. According to the BIS, there are three foundational principles for any general-purpose CBDC: 1. Do no harm to monetary and financial stability; 2. Coexist and complement other payment mechanisms and forms of money; and, 3. Support efficiency and innovation. To bring about these three foundational principles, the CBDC itself should be convertible, convenient, accepted, available, and low cost. Its architecture should be secure, instant, resilient, available, scalable, interoperable, flexible, and have high throughput. And at the institutional level, there needs to be a robust legal framework in place with the central bank having clear authority to issue CBDC and the CBDC system conforming with appropriate regulations. Most central banks are considering a CBDC by weighing the pros and cons, studying whether risks can be managed, and engaging in ample discussions with key stakeholders. Below we discuss oft-cited benefits and risks of CBDCs before examining design choices and their current state.

Benefits of a CBDC

CBDCs bring about many benefits and can enhance economic growth, facilitate global commerce, improve remittances, and fight inequality. In more detail, these include:

Disadvantages of a CBDC

Despite the many benefits, CBDCs are not without risks, though many can be mitigated via the CBDC’s design. Nevertheless, disadvantages include:

Central banks have a multitude of design choices to consider when implementing a CBDC instrument and its infrastructure. Moreover, such choices have complex interactions and trade-offs, and ultimately determine where and how the central bank fits into the payments ecosystem. At the instrument level, examples of design choices include whether to make the CBDC interest-bearing, which could help control its demand and facilitate rates pass-through but could draw greater deposits out of the banking system. Additionally, a central bank could limit the amount of CBDC a household may hold, which could curb digital runs but cause potential demand to be unmet. At the system level, central banks must consider choices around its structure, payment authentication, functionality, access, and governance. For example, the architecture could be centralized or decentralized, transfers cold run through a central intermediary or be peer-to-peer, the system and payment access/authentication may be identity/account-based or token-based, the ledger could contain simple liability data or more sophisticated payment information, and ledger access can be relatively open or more restricted, to name a few. Moreover, central banks must determine which responsibilities they will provide in addition to issuance, such as distribution, system administration, and device management, and which they will rely upon the private sector to deliver. Note that most central banks are leaning towards handling issuance and partnering with the private sector for the remaining functions, as well as utilizing centralized infrastructure or permissioned distributed ledgers for greater control and throughput. To bring CBDC to fruition, a variety of technologies may be used which must undergo extensive testing and pilots prior to implementation. Lastly, central banks and governments must employ a well-thought-out governance process and implementation strategy.

Central banks are in various stages of their CBDC journeys. As shown in Exhibit 1, of the 91 countries and currency unions tracked by the Atlantic Council, nine have launched a CBDC, 14 are in the pilot phase, 16 are in development, and 41 are actively researching the issue. Below we highlight select jurisdictions. 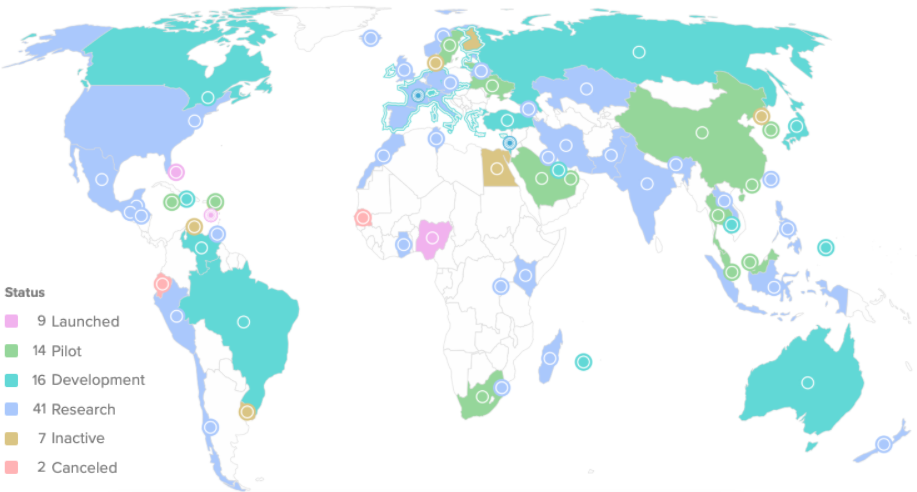