Cryptographic algorithms perform a variety of essential functions, including as a key component of cryptocurrencies. From the Caesar Cipher to ECDSA, we review the basics of cryptography in this week’s Chart of the Week.

From secure network communication to user authentication, data integrity verification, and disk encryption, cryptography performs a variety of functions and helps power many real-world use cases like online banking, secure messaging, and cryptocurrencies. Cryptography is the study of the techniques for securing communication and data in the presence of adversaries, and together with cryptanalysis, or the study of decryption without possession of the secret key, forms the larger discipline of cryptology. Cryptography uses various encryption algorithms referred to as a cipher to secure communication, where a cipher and a secret key transform input data known as plaintext into encrypted output known as ciphertext. Strong cryptographic algorithms will adhere to the key principles of confidentiality, integrity, non-repudiation, and authentication, and will utilize entropy and computation to protect the plaintext and secret key even when an adversary has accessed the ciphertext and understands the inner workings of the cryptographic algorithm employed. Given its central role in cryptocurrencies and beyond, we review the basics of cryptography, split out into symmetric cryptography, asymmetric cryptography, and cryptographic hashing functions.

In contrast to symmetric and asymmetric cryptography, hashing functions do not use keys, but instead, create a digital fingerprint of any arbitrary amount of data. To do so, the hashing algorithm splits the data into pieces and runs many rounds of local operations on them like AND, OR, and XOR, losing information as it goes and ultimately converting the data into a numeric string of fixed length such as 256 ones and zeros or 64 hexadecimal characters. Hashing functions should be one-way (the only way to know the input from a given output is to try all possible inputs), deterministic (returns the same output for a given input), easy to compute (but not so easy that one can quickly cycle through all potential inputs to solve), and produce few collisions (two different inputs should not produce the same output). Hashes have several benefits, such as improving efficiency and allowing for data verification without revealing the contents of the data. For example, rather than store passwords in a database that could potentially be hacked, a website can store hashed passwords. Then, when a user enters his or her password upon log-in, the website can simply take a hash of the entered password and compare it to its database of hashed passwords, materially enhancing security by not storing the passwords themselves (most websites modify this by adding a unique, user-specific random number to a user’s password prior to hashing in what’s called a salted hash. That way, if a hacker does get a hold of hashed passwords, the hacker can’t simply use a dictionary of hashes of common passwords to figure out some of the simpler passwords).

Cryptographic algorithms are a key component of cryptocurrencies. Bitcoin, for example, uses cryptographic signatures to verify transaction authenticity as well as cryptographic hashing functions to improve data efficiency, expose tampering, and secure the network as part of its consensus mechanism. A user wishing to send funds to another would take a hash of the transaction and sign it using ECDSA with transaction information, a random number called a nonce, and his or her private key as inputs to generate the digital signature. This digital signature can then be cryptographically verified (ie. proven that it came only from the person holding the private key) using only the digital signature, the transaction, and the sender’s public key. One does not need the private key to verify the transaction, and, since the digital signature depends on a nonce and the transaction itself, one’s digital signature will be different for every transaction, preventing malicious actors from simply copying prior valid transactions. The Bitcoin blockchain also links blocks together by including a hash of the previous block header, which time-orders the blocks, improves searchability, and makes them tamper-evident. And Bitcoin’s proof-of-work consensus mechanism relies heavily on hashing, where miners repeatedly hash their proposed block plus a nonce to be the first to solve the mining puzzle. Because the output of a hash function cannot easily be guessed, this ensures that miners are expending significant energy and computational resources to post a block, erecting a barrier for potential malicious actors and securing the network. For a much more detailed explanation of how bitcoin uses cryptography, please see our in-depth primer, How Bitcoin Works. 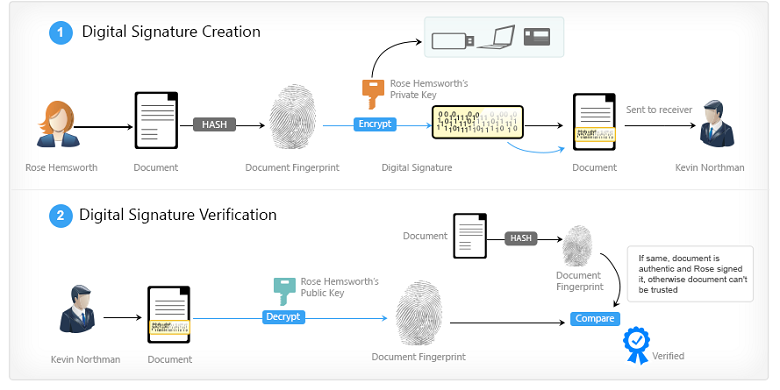