After a 7x increase in NFT volumes from July to August, volumes, though still elevated, fell considerably in September. We examine which projects have been driving this year’s growth before decomposing volumes into the number of wallets, sales per wallet, and price per sale in this week’s Chart of the Week.

2021 – What a Year: Whether measured by trading volumes, prices, owners, investment, or cultural awareness, 2021 has been a phenomenal year for all things NFT. Use cases such as sports (eg. NBA Top Shot), gaming (Axie Infinity), collectibles (CryptoPunks), and art (Art Blocks) are seeing record awareness and adoption. And while some of the ferver is undoubtedly part speculation, there is also an enormous amount of real utility that’s increasing as the space innovates at a breakneck pace. Such speculation, utility and innovation helped drive NFT volumes to $10.7b in Q321, up 704% from the prior quarter and 38,060% from the prior year, per DappRadar.

Top Projects Driving Volume: We compile data for the top 50 NFT projects by all-time sales volume from CryptoSlam to find that four projects – Axie Infinity, CryptoPunks, Art Blocks, and NBA Top Shot – have accounted for 60% of 2021 top project volume and, as such, have generally driven volume trends this year. Indeed, Top Shot both started the party in February, accounting for the vast majority of that month’s growth, and then drove the April decline as sales cooled off. June and July were then all about play-to-earn game Axie Infinity, which experienced parabolic growth after moving to its Ronin sidechain. August sales were then multiples of July’s, with ~$500m of growth from each of CryptoPunks, Art Blocks, and new project launches, and over $1b of sales growth from other existing top 50 projects, two thirds of which came from Bored Apes, 0N1 Force, Parallel Alpha, Pudgy Penguins, and Meebits. Volumes for the top 50 projects then fell ~40% in August, with 75% of the decline due to the lower CryptoPunks, Art Blocks, and Axie Infinity volumes.

Breaking Growth into Its Components: We can decompose sales volume into the number of active wallets, the average number of sales per wallet, and the average price per sale for a different cut of volume drivers. Under this view, growth in February was driven by both a higher price per sale, due to the rising average Top Shot sale price and a mix shift towards CryptoPunks, and an influx of new wallets, 90% of which came from new Top Shot users. April’s lower sales were driven by a lower average sales price, which itself was driven by the average Top Shot moment sale price declining from $160 in March to $70 in April. The growth components were relatively steady in the summer until July when Axie Infinity spurred total wallet growth (accounting for 85% of July wallet growth) and average price given Axie’s $500 average ticket price. August then saw strong user growth, driven by Axie Infinity, and a skyrocketing average sale price, driven by the average CryptoPunks sale price rising from $97,000 in July to $268,000 in August. September’s decline was then driven by a lower average sale price as a smaller percentage of total sales came from CryptoPunks. 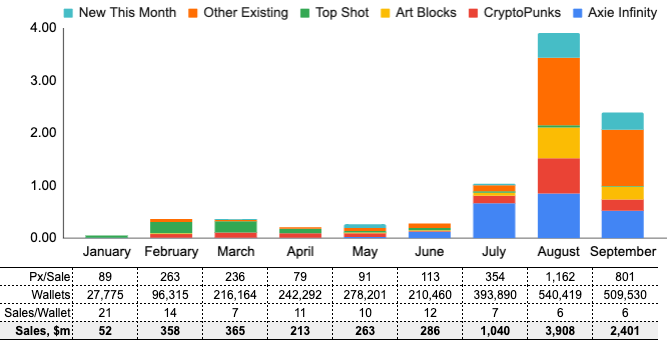