In this week’s Chart of the Week, we review Ethereum’s EIP-1559, which went live on mainnet on August 5th and includes fee burns that could make ETH deflationary.

1559 Overview: EIP-1559 is an Ethereum Improvement Proposal written by Vitalik Buterin in 2019. The proposal changes Ethereum’s gas pricing model to institute a fixed-per-block fee called the base fee that dynamically increases or decreases based on network congestion. As such, the change smooths out fee spikes, allows for greater fee predictability, limits overpaid transactions, and includes transactions in blocks faster.  Moreover, this base fee is burned, which reduces the supply of ETH and better aligns network value capture with network usage.

Old Versus New: Prior to EIP-1559, miners received block rewards, currently set at two ETH, as well as fees paid by users that were set by a first-price auction where users bid for their space in a block. Such a mechanism makes it difficult to know what price to bid and could cause one to overpay or miss out on having their transaction processed.  EIP-1559 maintains the block reward, but institutes a fixed-per-block base fee and an optional tip to incentive inclusion in a block. To set the base fee, block capacity is raised from 12.5m to 25m gas with the goal of running at 50% capacity. This allows the protocol to better gauge demand versus constantly full blocks.  Anytime a block’s utilization is greater than 50%, the base fee is increased for the next block up to a maximum of 12.5%, while anytime utilization is lower than 50%, the base fee in the next block is reduced up to a maximum of 12.5%. As such, fees can increase or decrease exponentially depending on demand while allowing for more consistent and clear pricing.

Sound Money: To prohibit miners from manipulating the base fee, the base fee is burned. This creates a positive feedback loop where the greater the network demand, the higher the base fee, and the greater the ETH that are burned, theoretically resulting in a higher ETH price, all else equal, and allowing the network to better capture value from increased network activity. Technically, ether becomes deflationary when the base fee is greater than the 2 ETH block reward, which Ethereum developer Tim Beiko has estimated occurs when gas prices are ~150 gwei under Proof-of-Work and 15-30 gwei under the forthcoming Proof-of-Stake. We show the projected ETH supply using conservative assumptions in Exhibit 1 below, where inflation improves post EIP-1559. 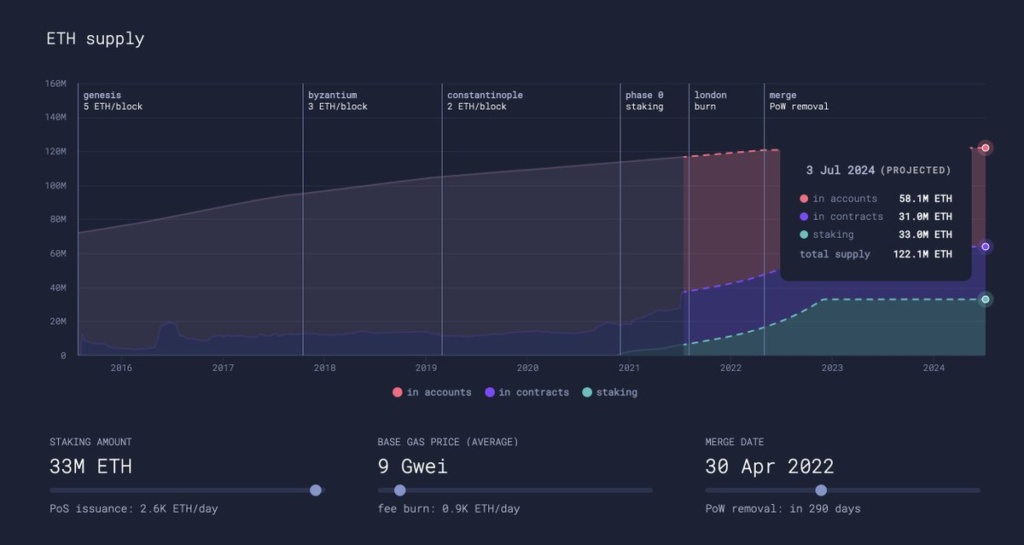 The Final Verdict: We see EIP-1559 as a key update and an important win for all involved. While miners do lose out on some of the economics, they are more impacted by other variables such as the price of ETH and mining difficulty, the former of which should benefit from EIP-1559, all else equal. And though gas costs are unlikely to fall materially due to the proposal – Ethereum 2.0 and layer two scaling solutions will be the drivers here – users benefit from greater clarity and alignment of costs and demand, while the network overall is better able to capture value from its use. To monitor the amount of ETH burned in real-time, please visit this ETH Burn Tracker, or for more information on EIP-1559, please see this EIP-1559 resource page.

This material is a product of the GSR Sales and Trading Department. It is not a product of a Research Department, not a research report, and not subject to all of the independence and disclosure standards applicable to research reports prepared pursuant to FINRA or CFTC research rules. This material is not independent of the Firm’s proprietary interests, which may conflict with your interests. The Firm trades instruments discussed in this material for its own account. The author may have consulted with the Firm’s traders and other personnel, who may have already traded based on the views expressed in this material, may trade contrary to the views expressed in this material, and may have positions in other instruments discussed herein. This material is intended only for institutional investors. Solely for purposes of the CFTC’s rules and to the extent this material discusses derivatives, this material is a solicitation for entering into a derivatives transaction and should not be considered to be a derivatives research report.This material is provided solely for informational purposes, is intended for your use only and does not constitute an offer or commitment, a solicitation of an offer or comment (except as noted for CFTC purposes), or any advice or recommendation, to enter into or conclude any transaction (whether on the indicative terms shown or otherwise), or to provide investment services in any state or country where such an offer or solicitation or provision would be illegal.Information is based on sources considered to be reliable, but not guaranteed to be accurate or complete. Any opinions or estimates expressed herein reflect a judgment made as of the date of publication, and are subject to change without notice. Trading and investing in digital assets involves significant risks including price volatility and illiquidity and may not be suitable for all investors. GSR will not be liable whatsoever for any direct or consequential loss arising from the use of this Information. Copyright of this Information belongs to GSR. Neither this Information nor any copy thereof may be taken or rented or redistributed, directly or indirectly, without prior written permission of GSR. Not a solicitation to U.S. Entities or individuals for securities in any form. If you are such an entity, you must close this page.