After double-digit percentage increases in both July and August, Bitcoin gave some back in September, falling 7% after entering the month around $47,000 and ending around $44,000. Poor performance was mainly concentrated around two events. First, despite Bitcoin officially becoming legal tender in El Salvador on September 7th, investors sold the news, which set off elevated liquidations and caused BTC to fall 11% on the day. Second, concerns surrounding struggling Chinese property developer Evergrande peaked around September 20th, causing BTC to pull back 14% over two days. A heightened regulatory focus around the world also contributed, though there were multiple positives as well, including a continued push into crypto by traditional finance and tech companies and continued heavy institutional investment into the ecosystem. Other Bitcoin-specific headlines include El Salvador’s Bitcoin purchases, its initial Chivo wallet hiccups, further Microstrategy Bitcoin purchases, a successful Bitcoin Core 22.0 release, the Bitcoin.org hack, new Twitter Bitcoin tipping functionality, and record Lightning Network nodes and channels.

Ethereum entered the month around $3,400 and exhibited similar performance to Bitcoin, ending September around $3,000 for a similar 7% decline. While Ethereum revenues were up nearly 60% from August, much of the outsized revenues were concentrated towards the beginning of the month coinciding with high NFT volumes that later subsided. Other major Ethereum-related news on the month included setting the Altair upgrade, a JP Morgan report stating that investors are pivoting from Bitcoin to ether, the ETH 2.0 deposit contract surpassing $25b of ETH, the burning of over $1b of ETH post EIP-1559, a thwarted network attack, and layer two scaling solution Arbitrum’s surging TVL. The falling exchange supply of both Bitcoin and Ethereum also garnered attention and should be supportive of prices going forward, with the percentage of Bitcoin’s supply on exchanges falling from 13.3% to 12.8% during the month and Ethereum’s falling from 17.2% to 16.0%.

The two items that stood out to us in particular during the month were the heightened regulatory focus and a continued push by traditional financial and technology companies into crypto.

The biggest regulatory news of the month was China’s crackdown on crypto, with regulators banning all crypto transactions and mining activities and vowing to step up enforcement. While China had already issued bans this past May, in 2017, and in 2013, the latest announcement is the most expansive yet with greater coverage, regulatory coordination, and a seemingly greater commitment to enforcement than in the past. The ban caused widespread reactions, with exchanges such as Bybit, Huobi, and KuCoin discontinuing services for users in mainland China, China-based mining pools SparkPool and BeePool shutting down, mining equipment manufacturers or marketplaces such as Bitmain and Alibaba halting sales in China, and the blocking of crypto websites such as CoinMarketCap and TradingView in the region. OKEx and Huobi, which were founded in China but later moved out of the country, saw their tokens react negatively, while decentralized perpetuals exchange dYdX saw its trading volume and token price benefit greatly.

Regulatory headlines were also abundant in the US, particularly around the SEC. During the month, SEC Chair Gary Gensler outlined the need for additional crypto investor protections, highlighting token offerings, trading and lending platforms, stablecoins, and investment vehicles as areas of focus. Additionally, Gensler argued that crypto exchanges should register with the SEC, reiterated that some tokens are likely securities, and compared stablecoins to poker chips at a casino. Coinbase also pulled its Lend product after receiving a Wells notice from the SEC, while the SEC is also said to be investigating Uniswap and potentially Tether. One piece of positive news was Gensler’s constructive comments around a futures-backed Bitcoin ETF. Near-term, we’re watching for the Treasury’s coming stablecoin report, whether the SEC approves a Bitcoin ETF, and what happens with the delayed infrastructure bill and included crypto provisions.

TradFi & Tech In on the Party 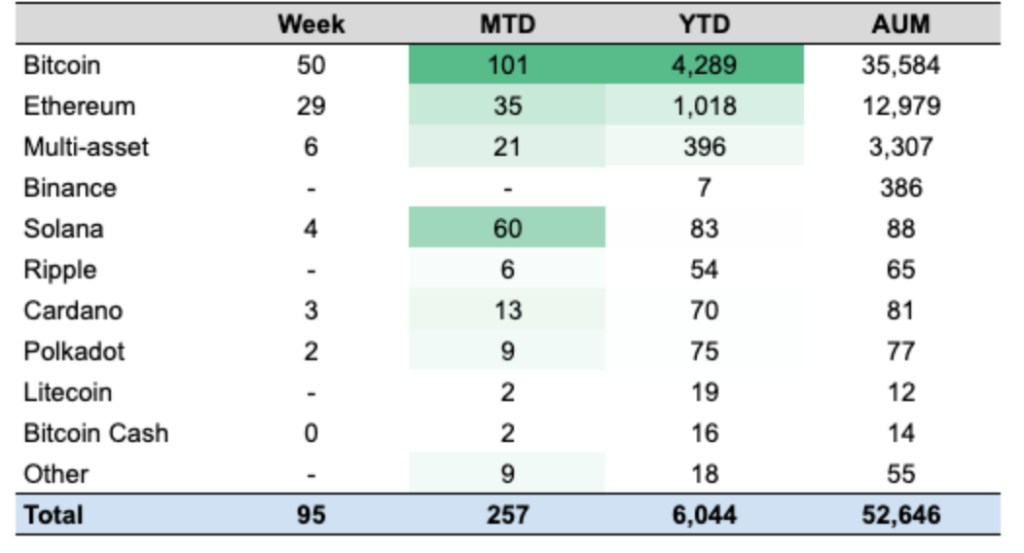 GSR participated in the funding rounds of Eden, Domination Finance, Cabital, deBridge, and several others. GSR is a strategic partner to over 50 projects building the future of finance and technology.

GSR attended several conferences during the month of September, including the Digital Asset Summit 2021 where our CEO USA Trey Griggs participated on Capital Efficiency, and Crypto Market Structure panels.

GSR in the News 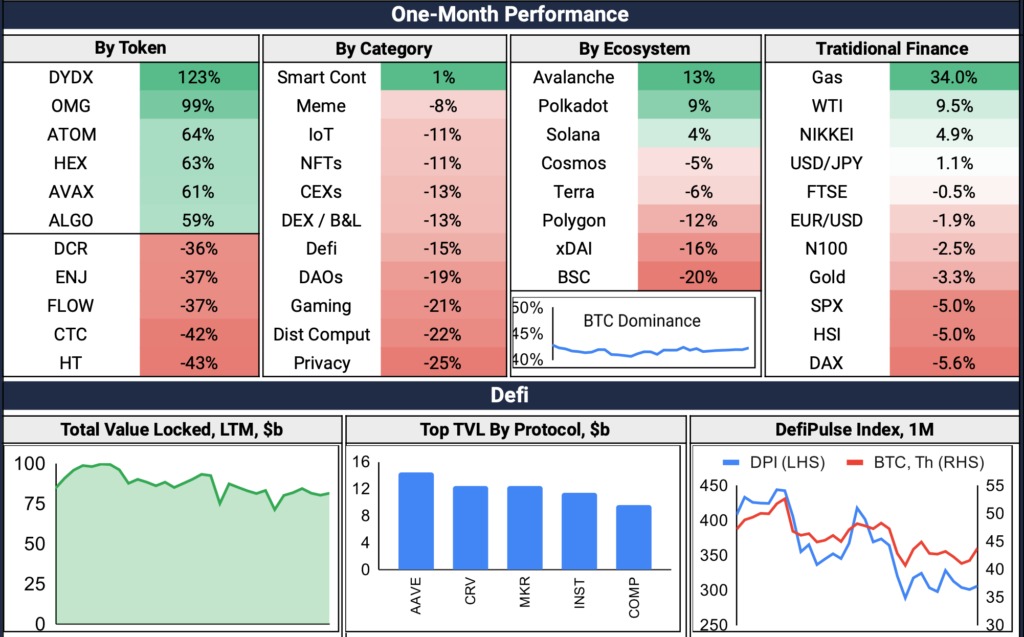 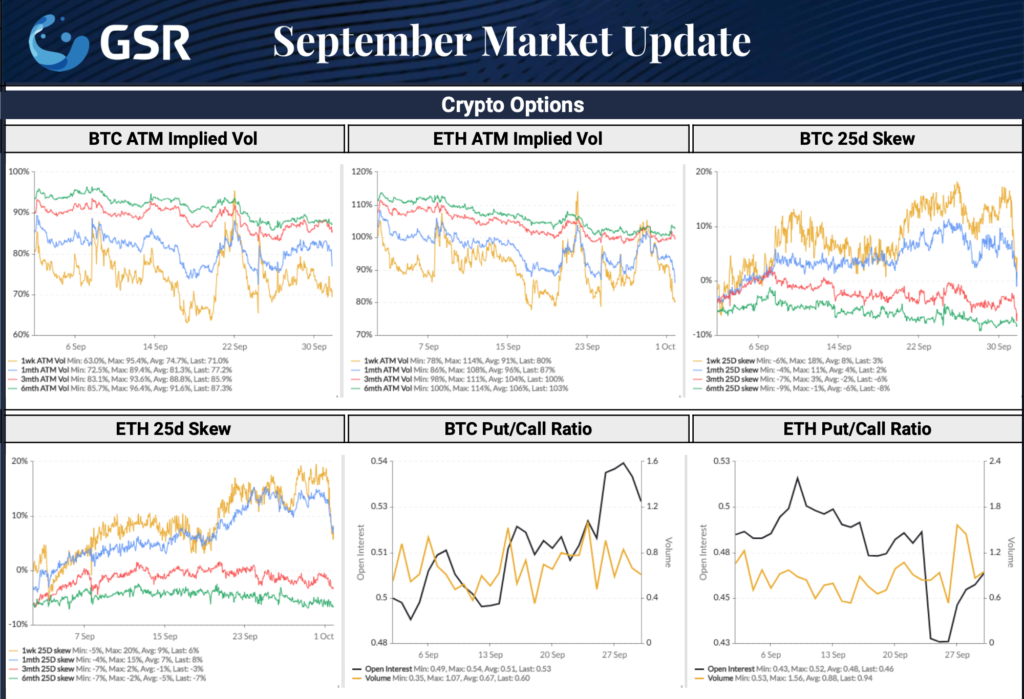 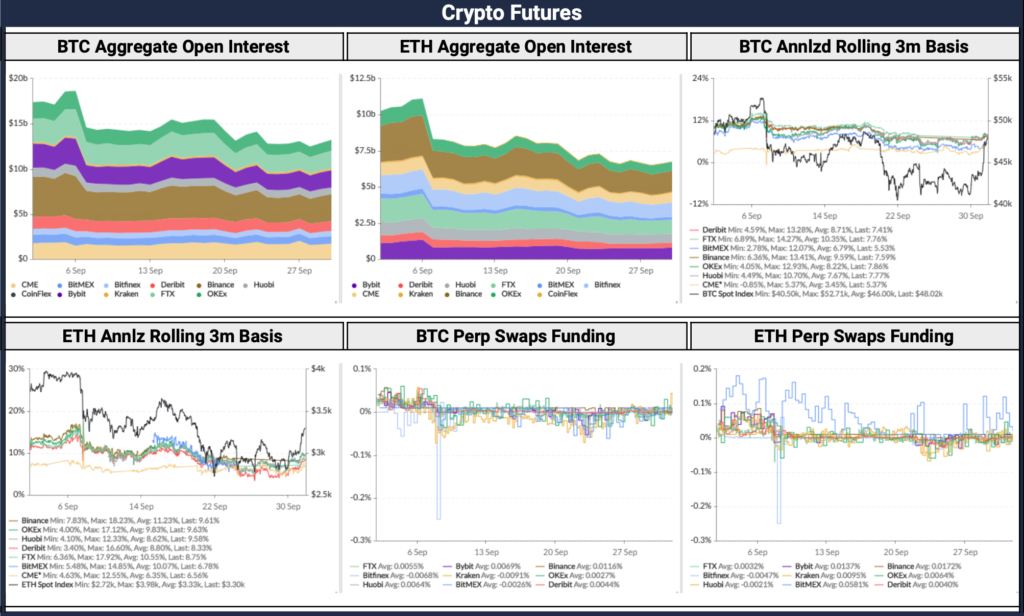 This material is a product of the GSR Sales and Trading Department. It is not a product of a Research Department, not a research report, and not subject to all of the independence and disclosure standards applicable to research reports prepared pursuant to FINRA or CFTC research rules. This material is not independent of the Firm’s proprietary interests, which may conflict with your interests. The Firm trades instruments discussed in this material for its own account. The author may have consulted with the Firm’s traders and other personnel, who may have already traded based on the views expressed in this material, may trade contrary to the views expressed in this material, and may have positions in other instruments discussed herein. This material is intended only for institutional investors. Solely for purposes of the CFTC’s rules and to the extent this material discusses derivatives, this material is a solicitation for entering into a derivatives transaction and should not be considered to be a derivatives research report. This material is provided solely for informational purposes, is intended for your use only and does not constitute an offer or commitment, a solicitation of an offer or comment (except as noted for CFTC purposes), or any advice or recommendation, to enter into or conclude any transaction (whether on the indicative terms shown or otherwise), or to provide investment services in any state or country where such an offer or solicitation or provision would be illegal. Information is based on sources considered to be reliable, but not guaranteed to be accurate or complete. Any opinions or estimates expressed herein reflect a judgment made as of the date of publication, and are subject to change without notice. Trading and investing in digital assets involves significant risks including price volatility and illiquidity and may not be suitable for all investors. GSR will not be liable whatsoever for any direct or consequential loss arising from the use of this Information. Copyright of this Information belongs to GSR. Neither this Information nor any copy thereof may be taken or rented or redistributed, directly or indirectly, without prior written permission of GSR. Not a solicitation to U.S. Entities or individuals for securities in any form. If you are such an entity, you must close this page.”